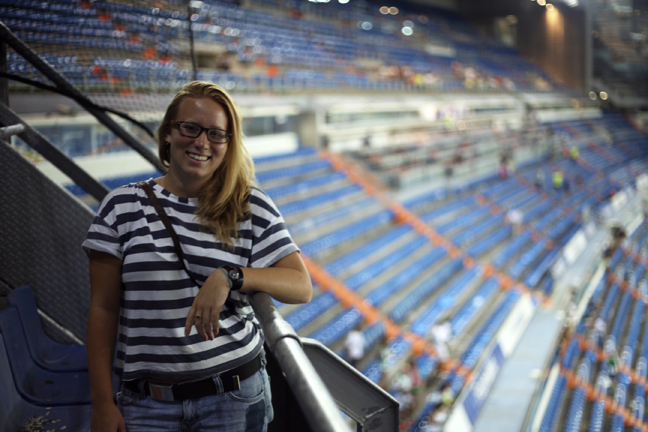 First and foremost: it’s pronounced Am-yell. I know it’s a bit out there and you’re probably looking at it going, “What kind of name is that?”  You’re not the first to think it and you probably won’t be the last and I’ve heard pretty much every comment a person can make on an odd name.

Now that that’s sorted: I’m a 22-year-old journalist living in Wetaskiwin, AB working for the Wetaskiwin Times. I started in September, 2014 after travelling around Europe for two years. I’m originally from Saskatchewan, Canada and in August 2012, I packed up and moved to France as an au pair. I lived in Chartres for three months before things didn’t work out with my host family (though not before I spent a weekend in Paris) and I took a two week visit to the coast before moving for eight months to Plateau D’Assy, which is a small town in the Alps, about half an hour from Mont Blanc. During my time there I headed to Prague for New Years, spent a weekend in Lyon and watched my French football club, Saint-Étienne, play in a snowstorm. I travelled for a much needed holiday to Nice and visited Annecy once or twice.

After my time in France was done, I spent 10 days in Sweden, with a stay in Lund, a visit to Helsingborg, Malmö (where I watched Malmö FF play, aka Zlatan’s old club), a day trip to Copenhagen before I headed up to Stockholm and then a day in Linköping to watch Women’s Euros 2013. (Have you noticed a football theme around here?) Then there were two weeks spent in London where I felt like melting into the couch because the heat was just unbelieveable and I now believe I have been lied to my entire life about what the weather is like in England.

I then made my way south to Spain, where I spent a year and fell completely, utterly and madly in love with the people and the language and the food. I lived in Madrid for 10 of those months and a piece of me remains. (Not literally…) I also spent time in the Basque country, visiting San Sebastian while I was there. I experienced 40C in November in Valencia, spent Semana Santa in Barcelona before I headed to the south of Spain for the summer. There I stayed in a little town called Calahonda, in the ayuntamiento of Mijas, on the Costa del Sol. In my two months there, I spent time in Nerja, had an expensive (but wonderful) weekend in Málaga, headed to Granada for a last minute trip and spent my second last weekend in Spain in Sevilla.

If you’ve arrived at my blog looking for information about au pairing, I have an Au Pair Lessons series as well as an Au Pair 101 post that I’ve put together.  If you have any more questions after reading through those, I’d be more than happy to answer!

I’ve also put together a post on travelling fairly inexpensively, Being Abroad: Travelling on the Cheap, with tips that I’ve accumulated over the last two years of being abroad.

I also have a post that goes up every Monday on a photographer whose work I admire called Favourite Photogs and have been working on a project I call Sailor about my adventures in Europe. Other posts you might be interested in checking out are my Reaction Gif posts, Things I’ve Been Reading and Colour Palettes.

One thought on “About Me”