1. My hostel, which I would recommend.

5. Was where we randomly got lost.

6. The area where the bars I went to were.

I feel like that’s quite literally, the most boring mini tour of a visit to Paris anyone has ever done on the internet. In my defence I would like to say that this is the first time I’ve ever done something like this and (hopefully!) next time it will be better. I am hoping to spend more time in Paris and hopefully after that, have more things to share with you guys. (This is me trying to be one of those people who have a link that says ‘Amielle’s Guide to Paris’ or something like that. I always wanted to be one of those people.) And if you have any suggestions (that that big guide book I have does not) as to what I should see next time I’m there: let me know!

I know this was supposed to be up yesterday and I know that, as this is my blog, I don’t really have to have explanations for not posting, however I will say that there are going to be some changes over the next couple of weeks and that posting may be off a little bit more than usual. Not for long and hopefully not really at all, but since you have all been so wonderful about being around and commenting, I figured I should let you know.

+ This article – (Something I never thought about before.)

+ This recipe – (My stomach started growling when I saw it.)

+ This goal – (Because I just really needed us to not lose yesterday. And my favourite player scoring was icing on that equalized cake.) 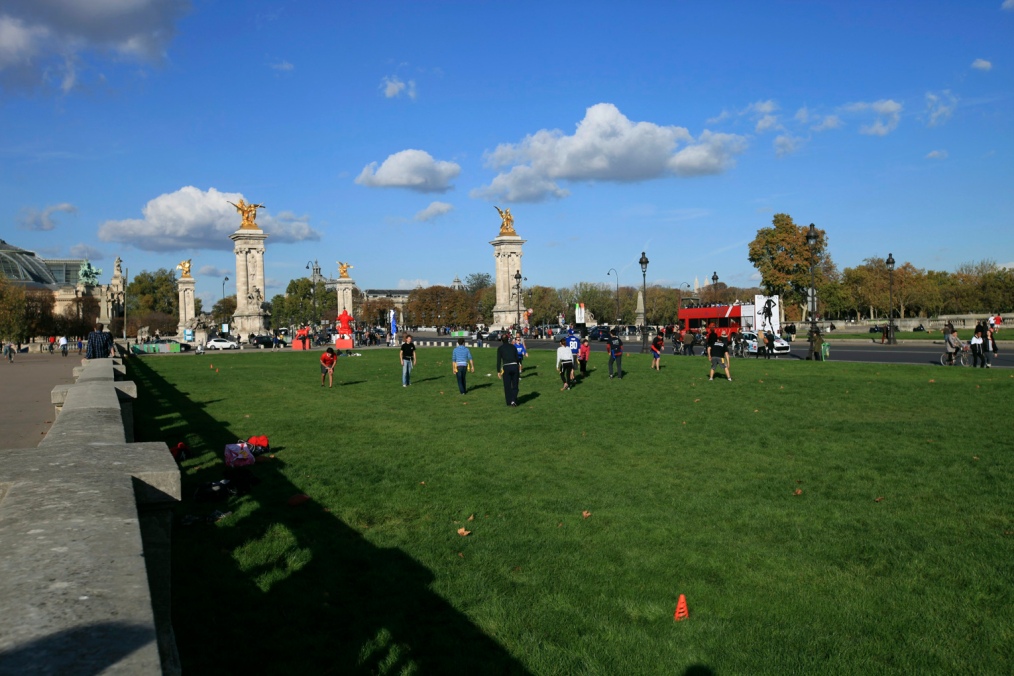 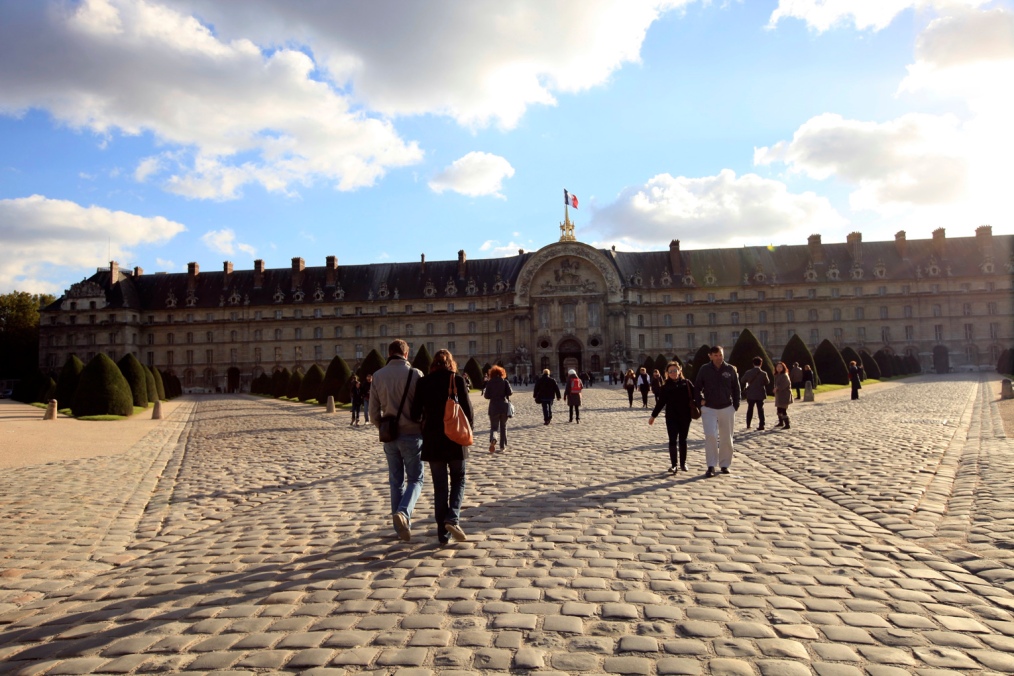 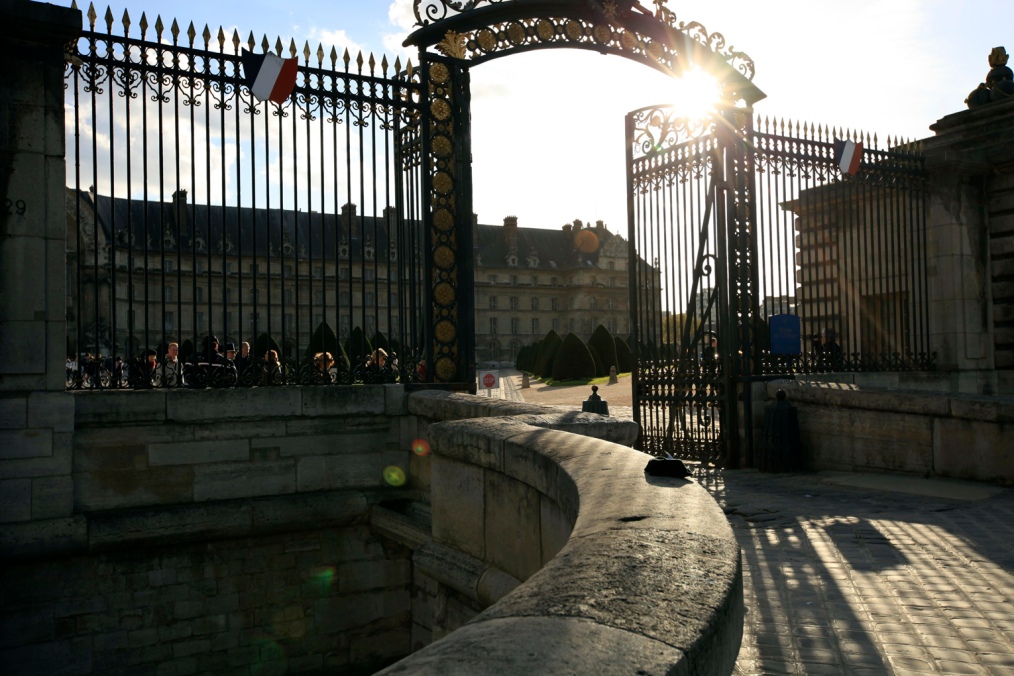 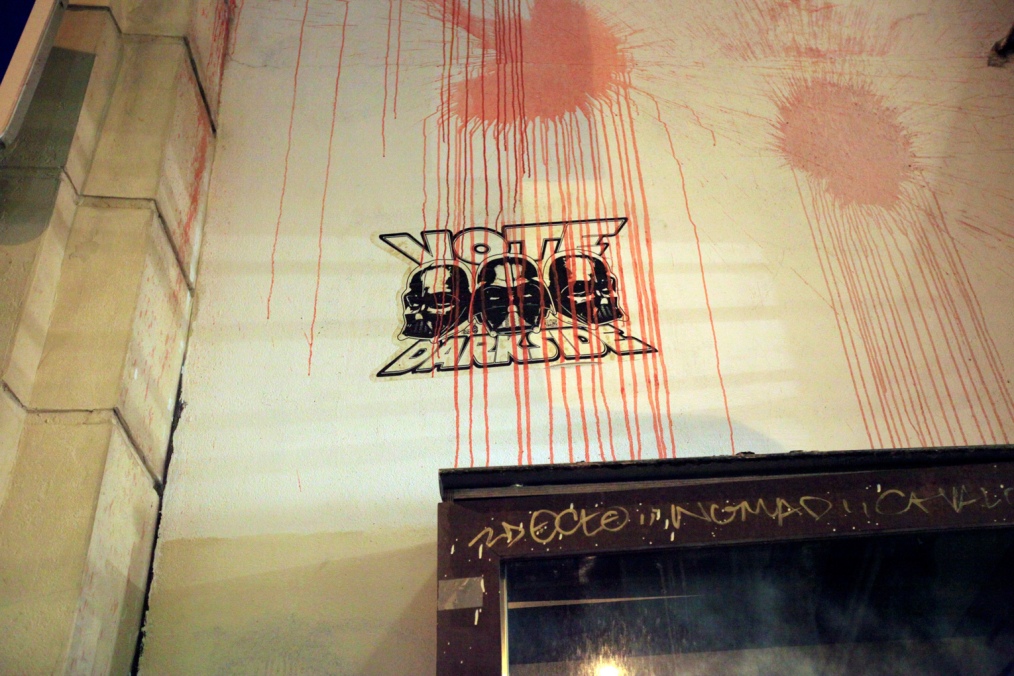 These are the last pictures of Paris, I promise. The top shots are all of the War Museum. I didn’t actually go in because a.) it was too nice out and b.) not really a huge fan of looking at military things. Though, I might go back some other time. I’ve heard the interior architect is gorgeous. The next time I’m taking shorts and runners too because you know how hard it is to watch people play flag football and volleyball and half a dozen pick up games of football and not be able to play? When you grew up on playing sports outside on the grass, in the sun, it is really, really hard to stand by and watch other people play when you can’t. Really hard.

And because I’m a Star Wars nerd, I couldn’t resist taking a picture of the graffiti tag that’s everywhere around the city. Also came back to the house and found that I had mail. A Halloween letter from my sister and another from my friend Sarah. I love mail. I wish I could tell you how much I love mail.

But there it is: all of my Paris photos. I do actually have a map that I edited with the places I went. I’ll throw it up in tomorrow’s post. Promise.

+ This kickstarter – (The idea is wonderful.)

+ These business cards – (When you run out, it’s really not a problem.)

+ This book – (The Sun Also Rises  is one of my favourite books. And I loved learning about Hemingway through Hadley’s eyes. An easy read (it took me two days) but enjoyable.) 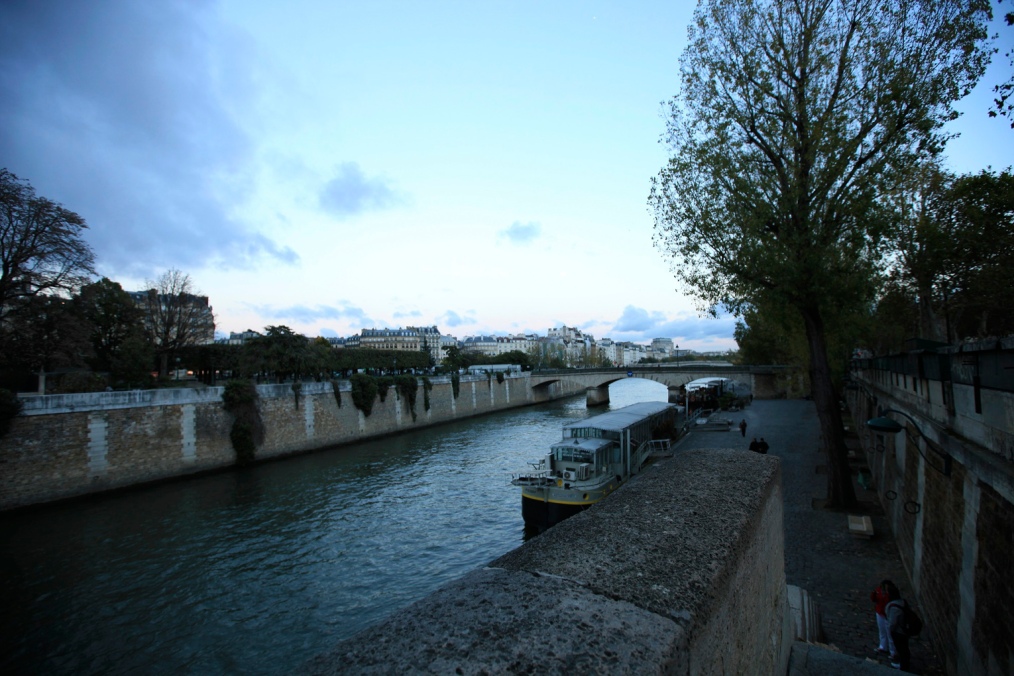 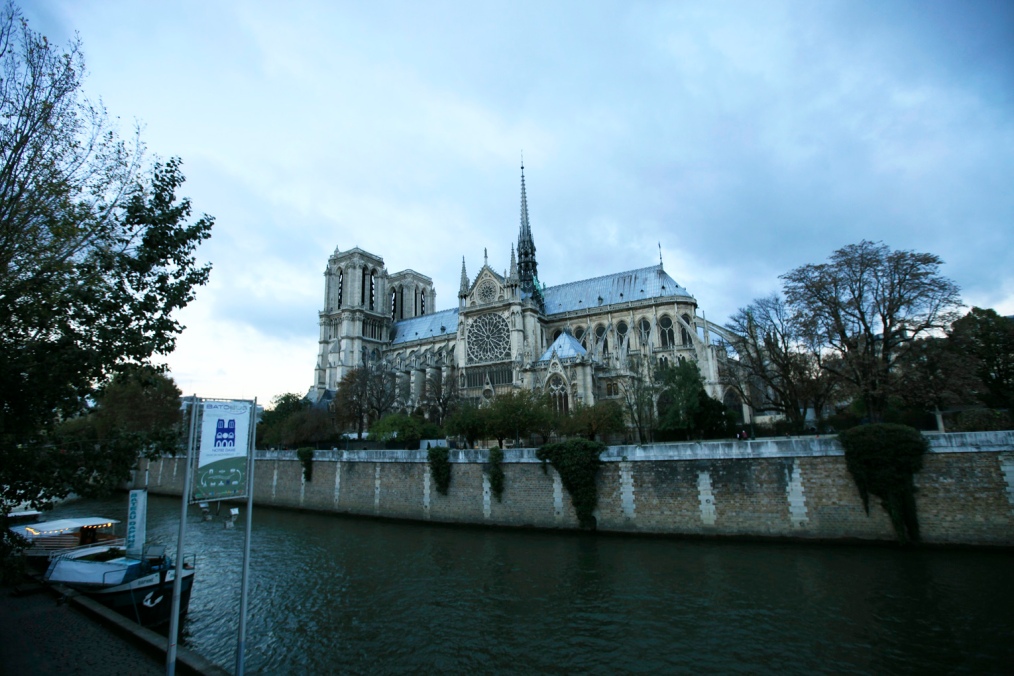 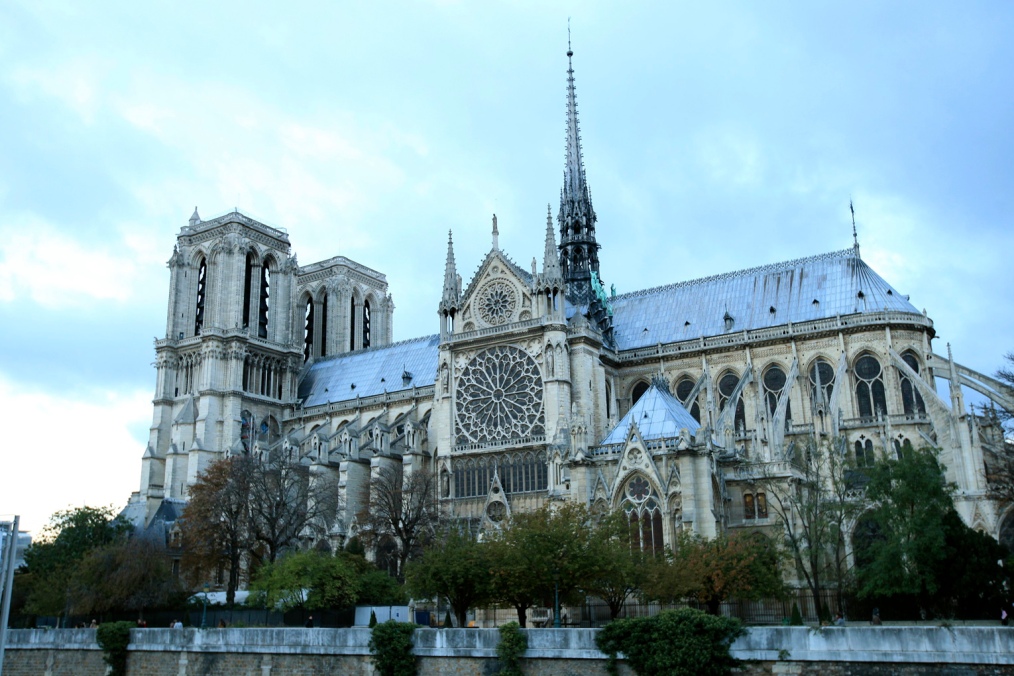 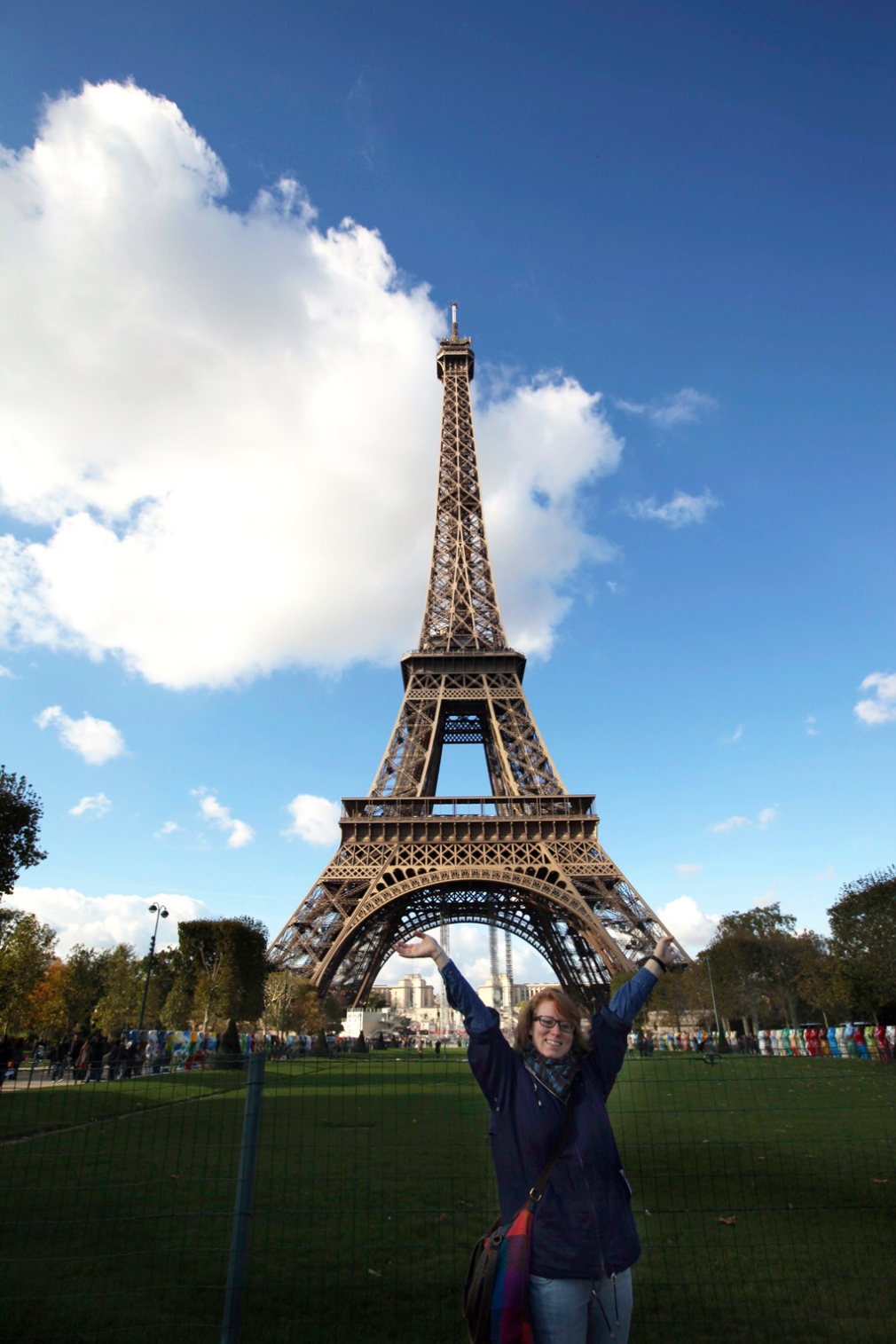 Basically: you don’t go to Paris and not see some things. Those things are: Notre Dame and the Eiffel Tower. That’s bordering on sacrilegious and that’s not something I was willing to mess with. I had some time before I met the expats on Saturday night and the bar was a ten minute walk from Notre Dame so I headed over. My camera actually died shortly after those shots were taken, which means that I’ll have to go back another time. Because brain imploding beauty should be attempted at being captured. (I think that sentence makes sense.) I walked everywhere Sunday (I do mean everywhere. If I’d thought this through, I’d have Photoshopped you all a little map of where I’ve been. Maybe for tomorrow’s post.) and ended up having one of those ~moments while staring at the Eiffel Tower that essentially consisted of me going, “Eleven year old me is so jealous,” and, “Holy crap, I’m here, I’m actually freaking here.” They also have the Buddy Bears in the park right now, so I went and found the France and Canada ones and I have got to say: I get the Canadian one but come on. Some of them are absolutely breathtaking and then you get to Canada and go, “I’m sorry,” like a true Canadian would.

+ This site – (Because laughing is good.)

+ This recipe – (I miss pumpkin. Everyone else is getting overloaded and I get none. Sigh.) 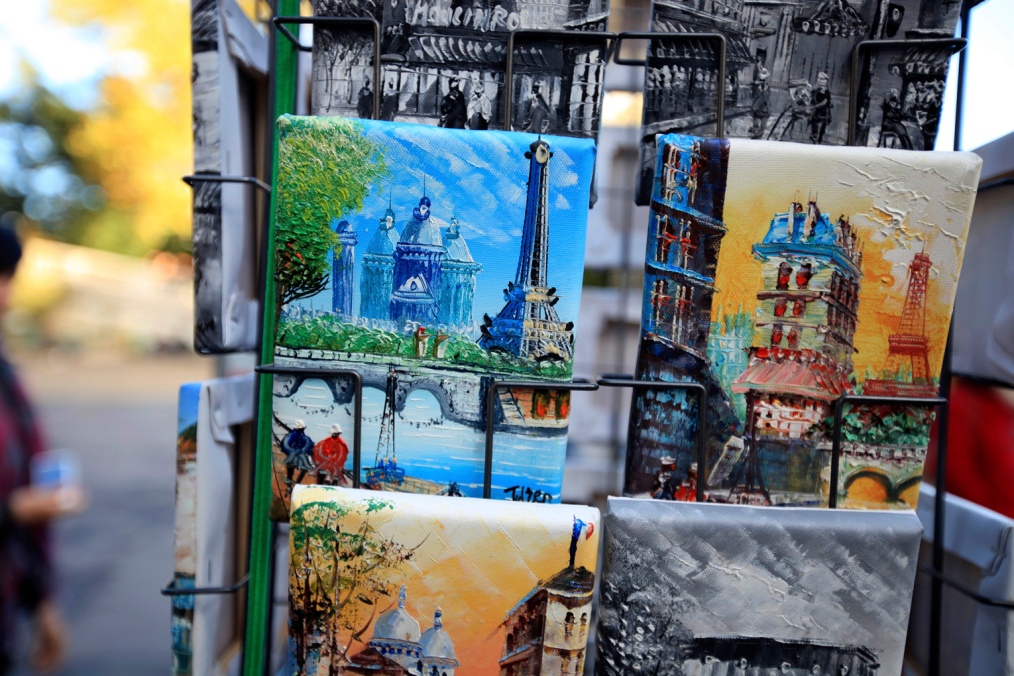 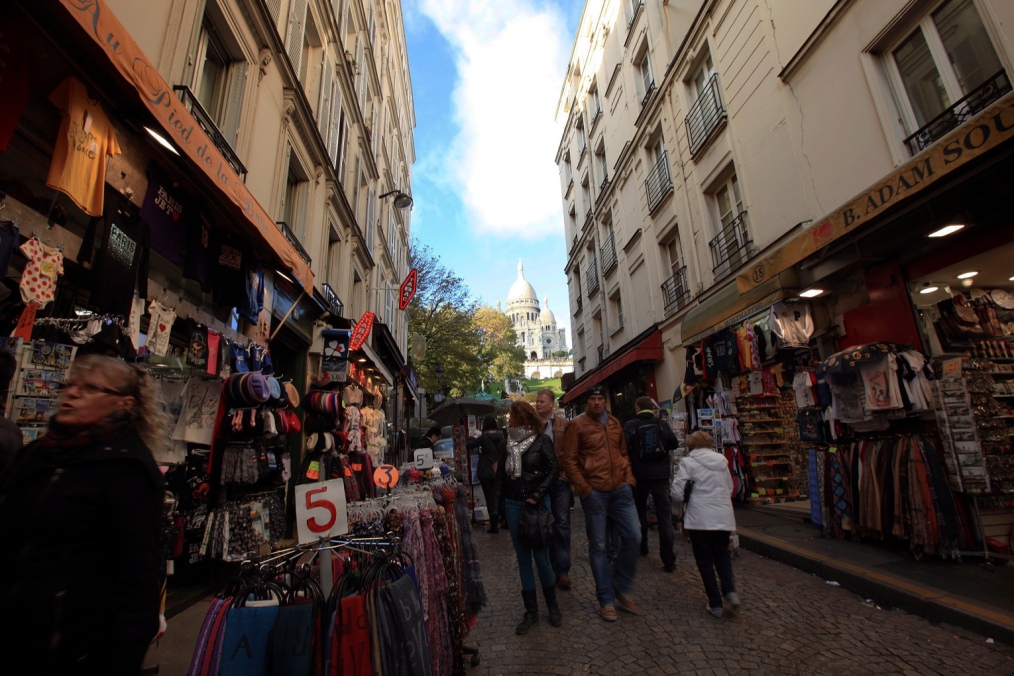 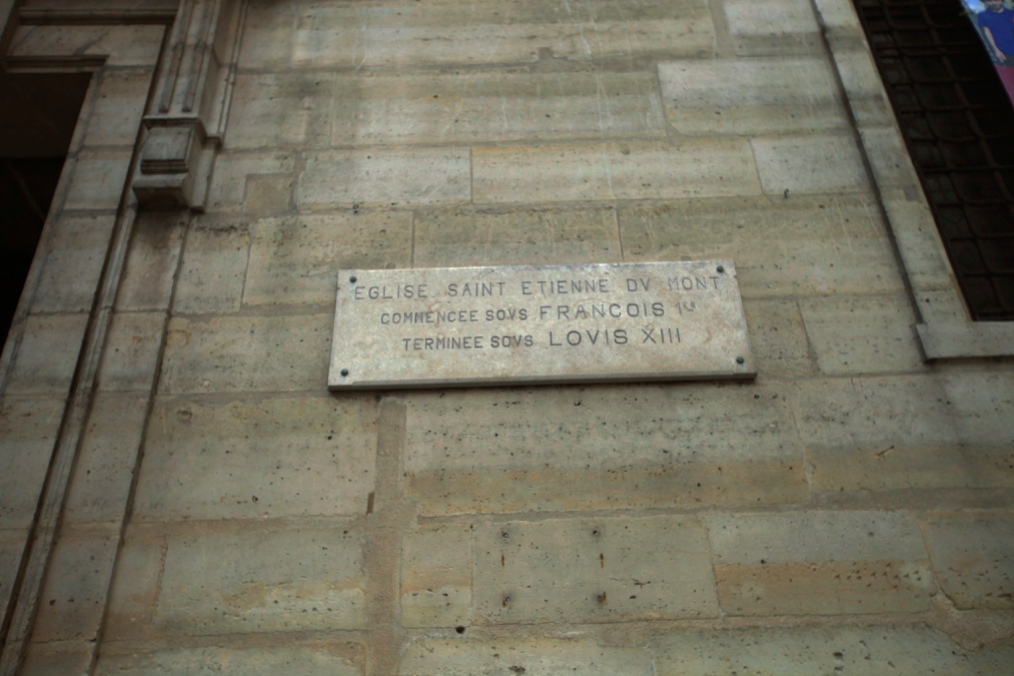 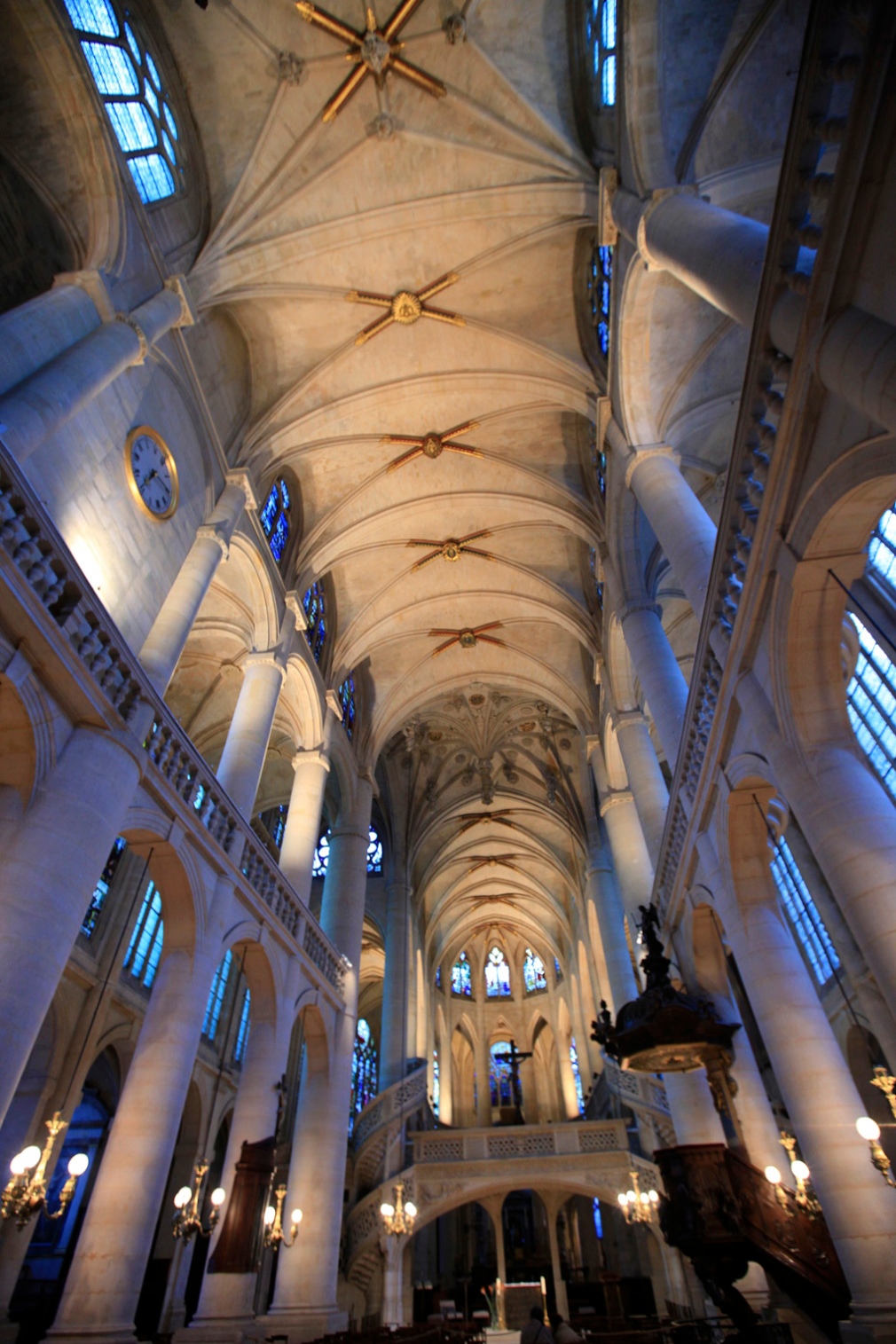 At the bottom of Montmartre there’s a carousal and a little kiosk with postcards and paintings (my mother has similar ones from her trip years back that hangs in the bathroom), little streets stuffed with shops. After that it was down to the other side of the Seine and I walked around looking at churches and political buildings until it was time to go here for drinks with some expats, which was something I really needed. (Both the drinks and conversation with people who understood English.)

We’ve all heard people talking about Paris in the fall (if you haven’t, where have you been?) and I can absolutely understand why. As much as I like fall back home (and I really like fall back home), I like how it’s different here. Maybe because of the city’s age or maybe because even with all the city around, fall still finds a way to colourfully be there.

+ This infographic – (Because even disappointing teams have memorable players.)

+ This video – (Glad to see this is coming together.) 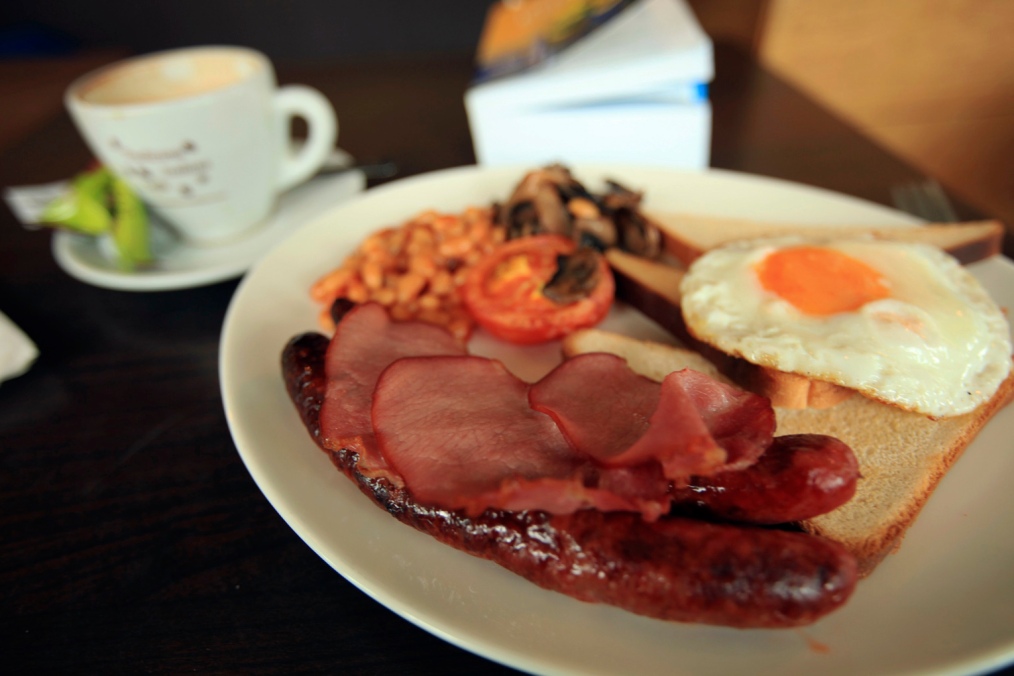 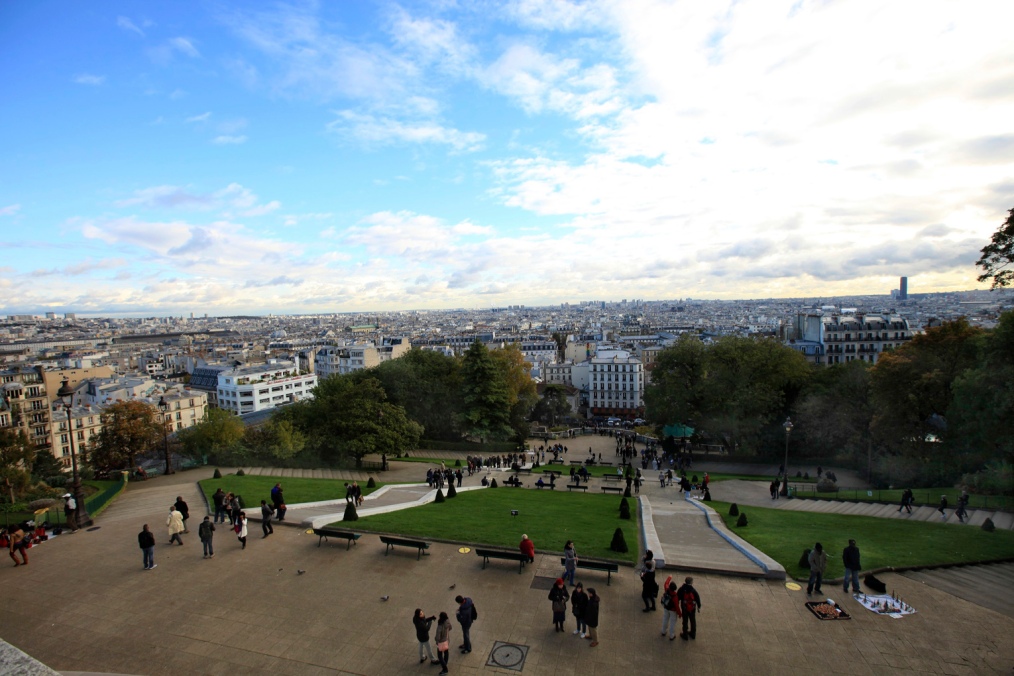 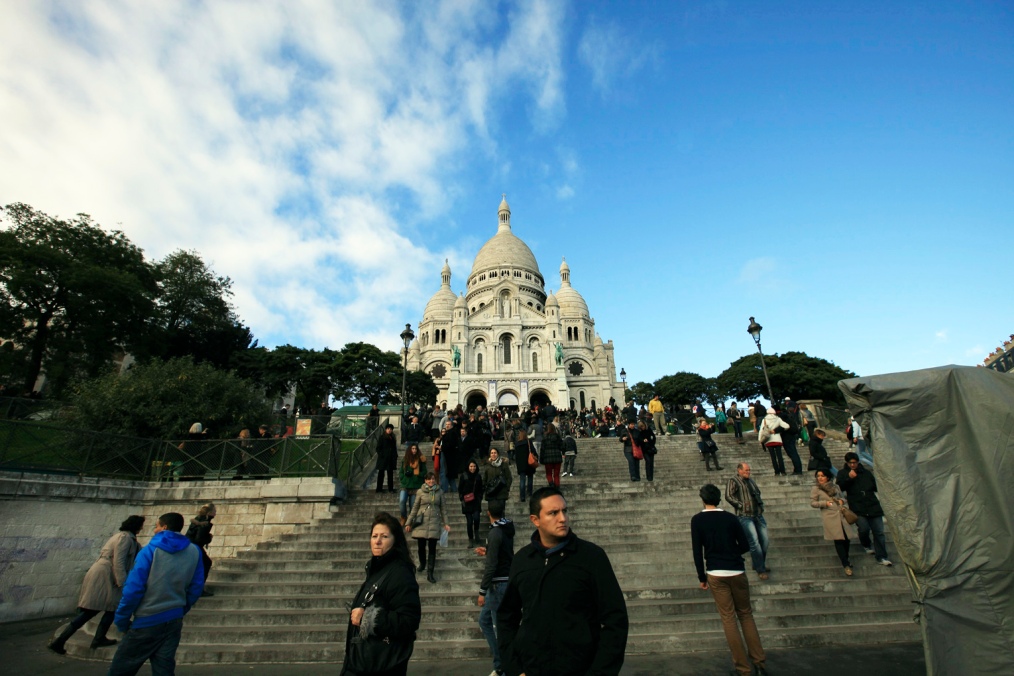 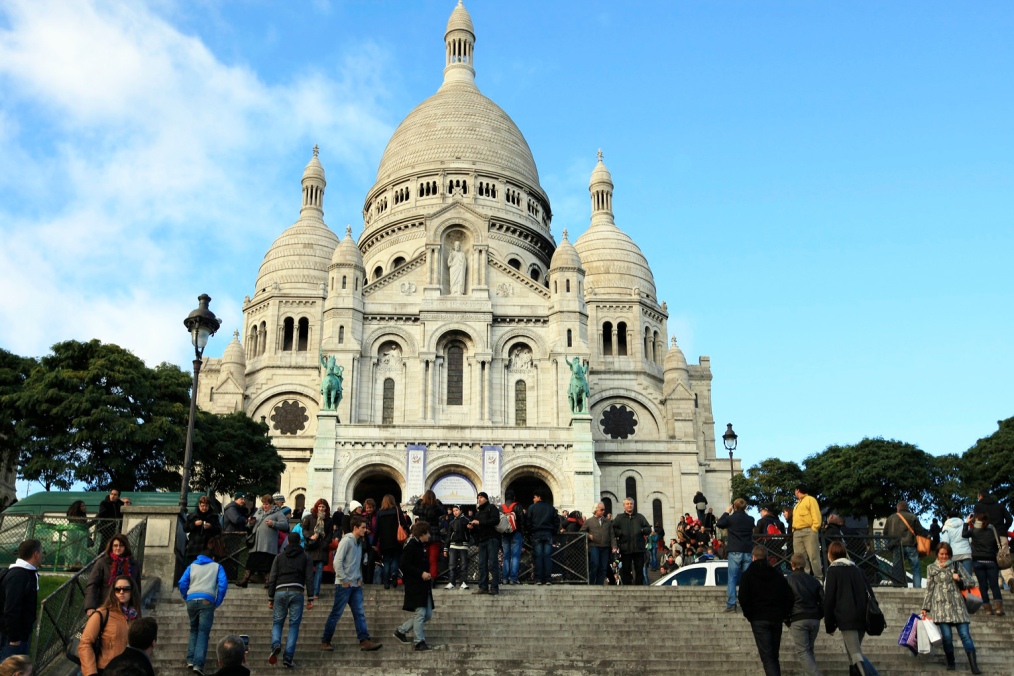 I know, it’s been a week since I posted. But, I have a good reason. See, I went to Paris this weekend. Yeah, I have the ability to just you know, amble up to Paris. For the weekend. That’s a thing, that I get to do.

I went old school with a guidebook, map and a pocket metro guide. (I was kind of forced to since my phone stopped working, but still, I did it.) I stayed at St. Christopher’s Inns, which while was a.) slightly further out of the way than I wanted and b.) in a kind of sketchy part of the city, the hostel itself was absolutely amazing. My standards for hostels have officially been substantially raised.

The first stop was Sacre Coeur (you can find it on my map in the last picture) where I: got caught by a tourist trap in the form of a bracelet,  wished that I had my longer lens (except that thing weighs 1390g and that’s a lot to haul around when you’re walking) and then shot video of the guy with the football on the ledge. (I tried finding Moulin Rouge after but there’s only so much not lost-ness I’m allowed per day and by that point I’d used up most of my quota. Decided I’d save that for my next trip.)

Also: that was the first time since getting to France that I’ve had anything that resembles a proper breakfast. I have missed them so much.

+ This article – (We were always told to stay away from unnamed sources.)

+ This bar – (I went Sunday night to watch RM play. The bartender is a Frenchman who speaks English accented English and likes NFL football. Figure that one out.)

+ Happy Halloween to al of you! I got to Skype home and see everyone’s costumes. Even saw a couple dozen kids dressed up here, which was kind of nice.