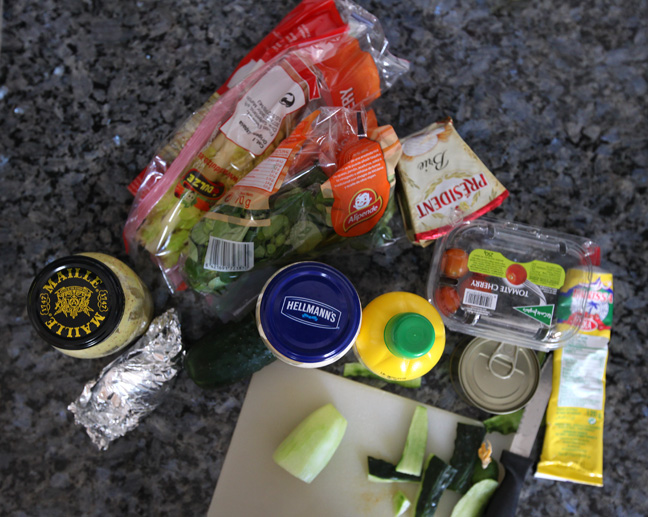 I’m kind of a big tuna fan. Tuna sandwiches. Tuna melts. Tuna in salad with cherry tomatoes and some dill. Heck, my mom even does this thing where she’ll toss in a can (or two, we’re a lot in my family) of tuna with Kraft Dinner and some vegetables and while, at least as much as I can remember, my sisters detest that dish, I’m a fan of it. And if you just made a face at that, don’t knock it til you try it because it just might surprise you. To sum up: I like tuna. And I made a tuna sandwich. With brie. This is all sorts of fancy here, guys. 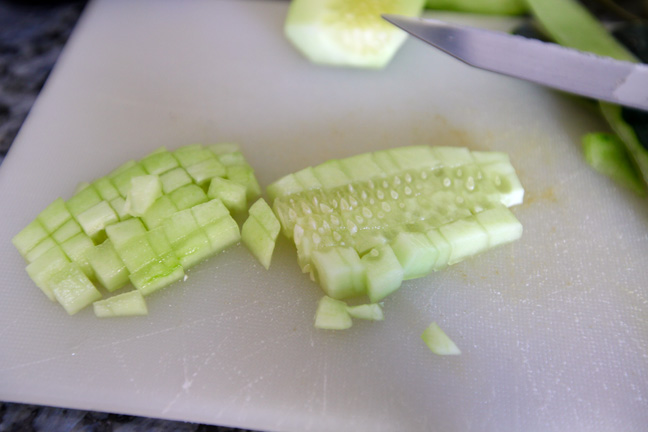 My go to with tuna is always, always cucumbers. There’s just something about tuna, cucumber and, if you’re lucky to have some in your house, dill that makes it crisp and cool. Tomatoes are a take or leave for me. But I had cherry tomatoes from a picnic I’d had earlier and wanted to use up, so in they went. Also some onion (for some crunch, some sharp flavour), a little bit of garlic (because I’m a huge fan) and then mayo! some Dijon/mayo combo that is not quite on par with my favourite whole grain Dijon, but we make do with what we have. I also squeeze some hot sauce because guys: tuna, cucumber, some mayo and hot sauce is actually a really delicious thing. It adds a bit of kick to back up that onion and balances out all that cool and crisp I talked about before. Also some greens because colour! texture!

Because I’d forgotten we were out of non-frozen bread, I had to microwave some of the hidden stuff in the freezer. Not as good, but I made do. Helped melt the brie a little bit, made it really stick to the bread before sticking that tuna mixture on it. It’s a little bit messy, so grab a napkin. (Wait, that could just be me. But just in case that’s also you: napkins.) Best eaten outside, in the sun, while wearing sunglasses and listening to your favourite Spotify playlist. Promise.

+ The Sexy Lie – (About sexual objectification and what that looks like.)
+ How to listen to music at work – (Even if you didn’t know you needed help.)
+ This song – (On repeat)
+ This article – (Such an important read!)